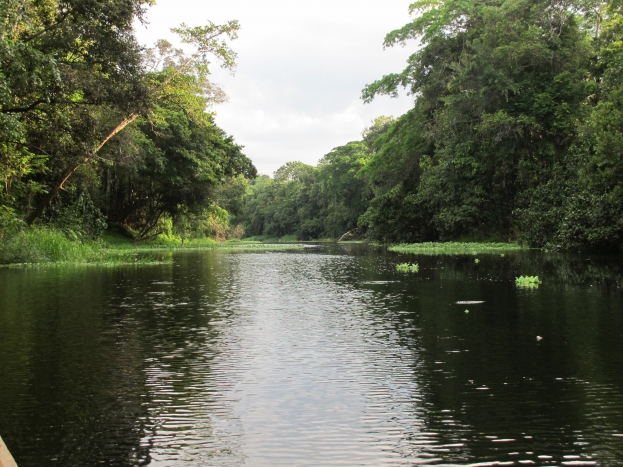 Stepping onto the tarmac at Iquitos in northeast Peru sure is a shock – a wall of liquid humidity smacks you and the sweat starts pouring immediately. If you’ve spent the past few months wearing jeans and jackets like we have, it’s a welcome feeling, but the heat sucks the energy out of you.

Isolated by the Amazon rainforest, Iquitos is a manic city blaring with motorbikes and moto-taxis (three wheel bikes with seating for three across the back). You definitely have to look both ways twice when crossing any road. 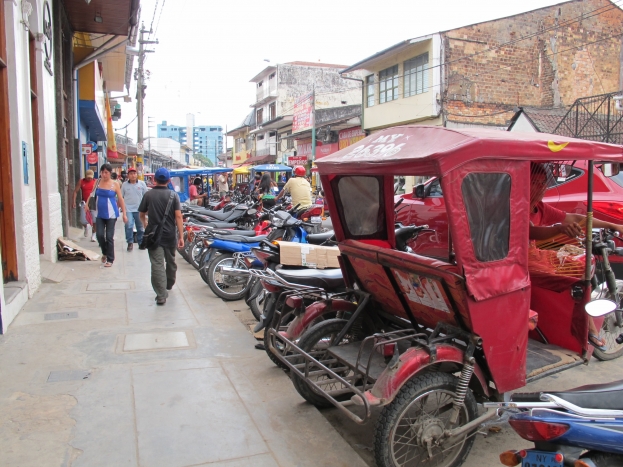 Within moments of checking into the Flying Dog hostel, they had arranged for someone from Emerald Forest Expeditions to drop in for a chat about a jungle trip. It cost 150 Soles (roughly AU$50) per day, which included transport, a guide, meals and accommodation. We’d expected to pay well over AU$100 per day, so signed up immediately for four days and three nights at the furthest human outpost in this Amazonian region.

We were picked up at 5am for a 1.5 hour drive to a small port town where we boarded a wooden boat for a three hour journey to the Amazon Refuge Lodge. After making several turns down small Amazonian rivers, and spotting plenty of hawks, vultures and other birds, we arrived at the tranquil lodge. 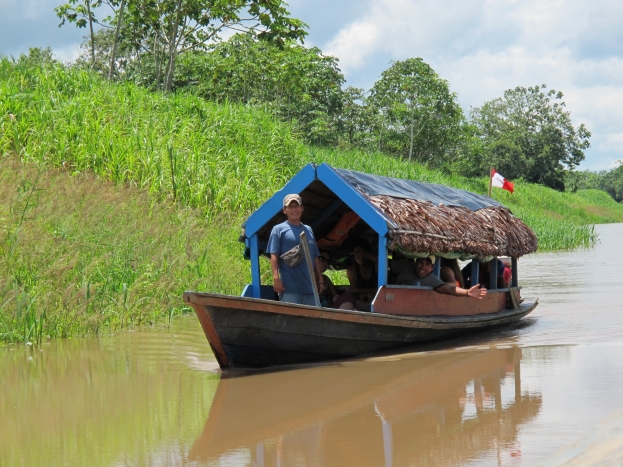 The accommodation was basic, but once we had a mosquito net rigged up, we were protected from the night-time critters who threaten to interrupt a good night’s sleep. 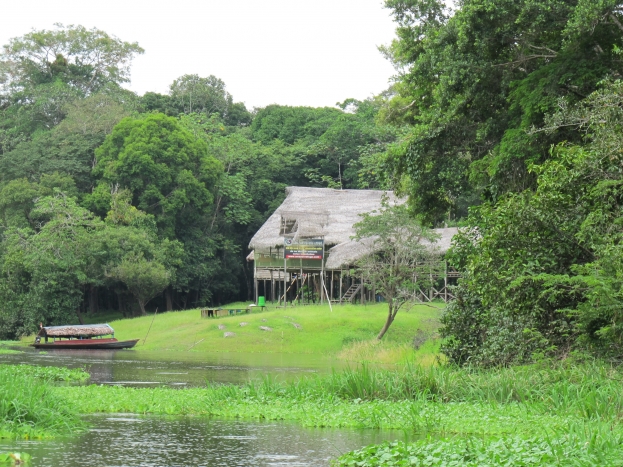 Our guide Wilder was a real character. He came from one of the nearby villages and his knowledge of Amazonian wildlife was phenomenal.

On our first afternoon he took us for a wander through the nearby forest. Most of my wilderness experiences have involved following a well-worn tourist path but the area we were in was so pristine that Wilder just started wandering through, machete in hand, slashing any limbs that got in our way. We saw monkeys in the tree-tops, a tarantula and small frogs. He also knows a lot about bush medicine and he showed us how to drink from a tree trunk for a natural tummy trouble cure. 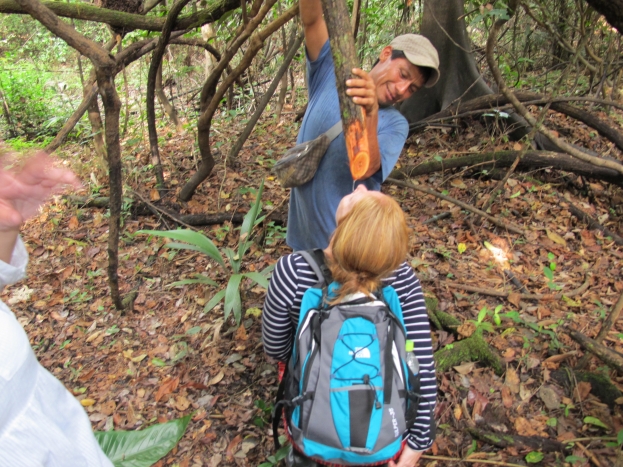 At night we climbed aboard a wooden canoe to go caiman spotting. After a couple of hours, Wilder saw the trademark eyes in his torchlight and carefully waded to the bank to snatch it up and show us in the boat. He estimated this one was 1.5 years old and explained they can grow up to 8m. 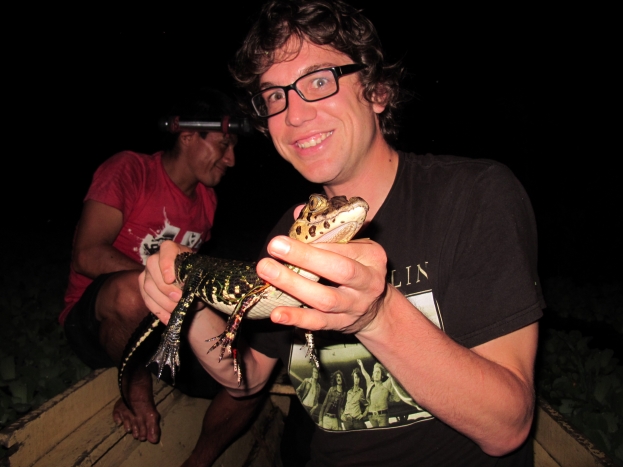 The next day he took us piranha fishing using traditional rods made of sticks.

My partner Joel caught the first catch, and soon we’d all caught a couple, which Wilder cooked up for lunch. 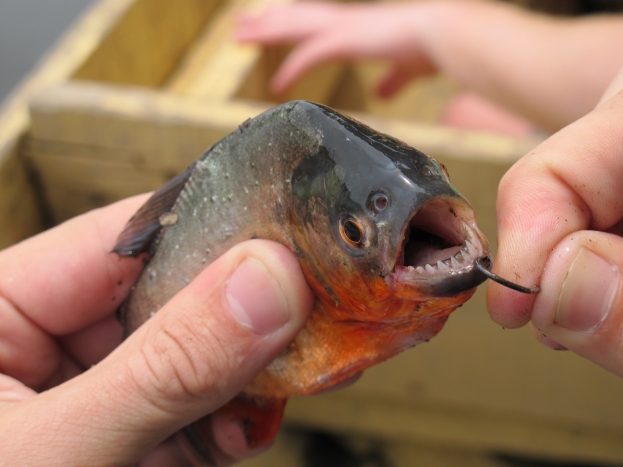 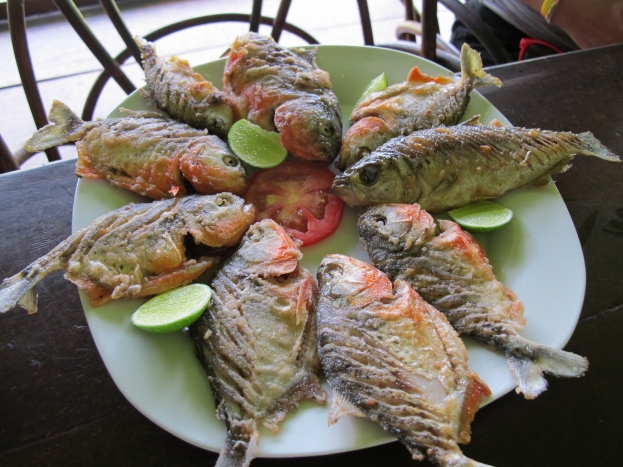 Later we called in to Wilder’s village, where we played volleyball with the locals and mucked around with the adorable children. 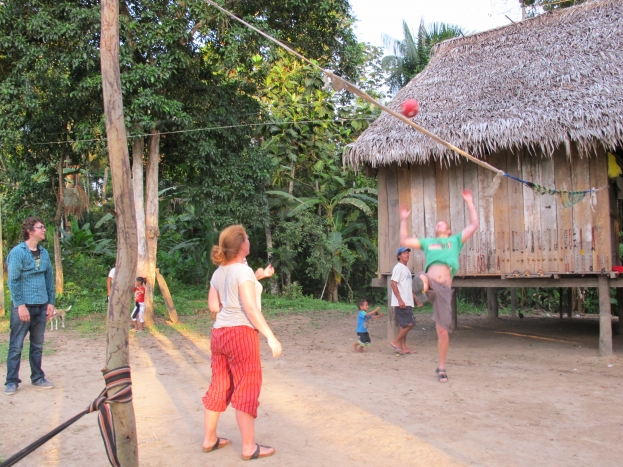 Wilder also showed us how they use red dye from a local fruit to make face paint for traditional ceremonies. 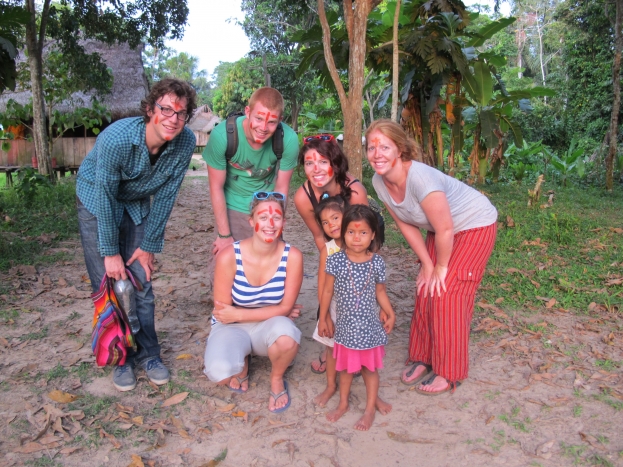 The day ended watching the sun set over the river while pink and grey dolphins frolicked about in the water. We saw at least 12 different dolphins and hopped in for a quick swim with them, although it was a bit unnerving when you couldn’t see through the muddy water! Unfortunately the dolphins were so quick that I wasn’t able to get any shots of them, but the best way to describe them is “prehistoric”. 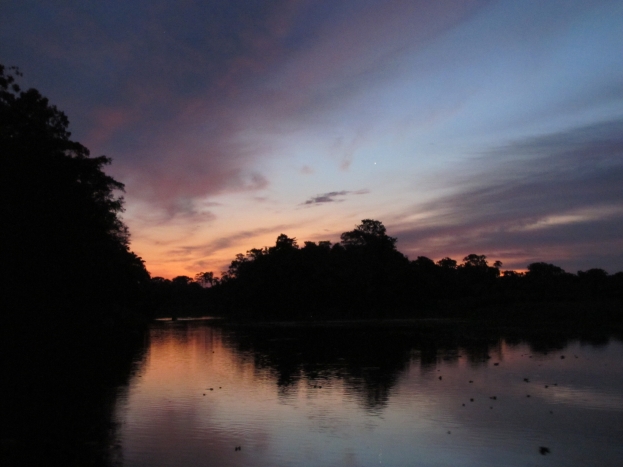 Very few people we’ve met on our South American trip have been to the Amazon, probably because it requires a flight. Big mistake!