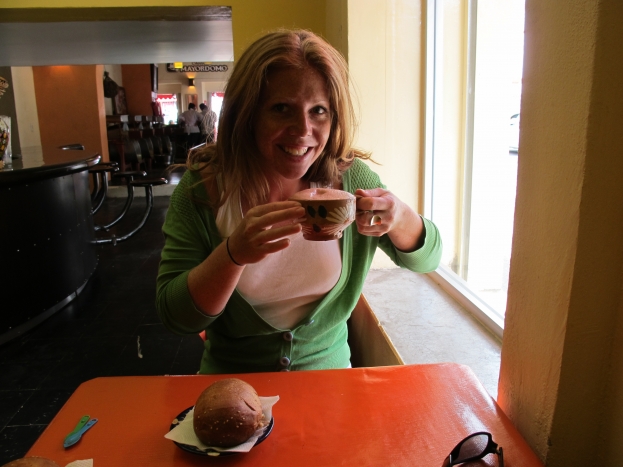 If you want to invigorate your sense of taste, smell and sound, then Oaxaca City, six hours’ drive southeast of Mexico City, is a must-visit destination. Nestled amongst the mountains, this colonial town is bursting with vibrant music, delicious aromas and tantalising foods, unlike anything you’ll find in Mexico.

The town is set in a grid of paved streets that run off the “Zocolo” (“town square”). Most of the touristy action centres around the Zocolo, where you’ll find indigenous people spruiking their wares, as well as vendors selling everything from helium balloons to toffee apples to shoe-polishing services.

After you’ve taken a seat at one of the many park benches and done a spot of people-watching, wander a few blocks southwest to indulge in one of the area’s famous specialties – hot chocolate. You’ll find stores called “Mayordormo”, which sell hot drinks made with cocoa, cinammon, almonds and sugar, with your choice of hot water or milk. It’s the perfect mid-morning treat in the cool mountain climate.

When your tummy rumbles for lunch, be adventurous and try a taco or memela (tortilla topped with beans, cheese and salsa) from one of the market stalls, but make sure you leave enough space for dinner – your tastebuds are promised a delicious wake-up call.

Our first dinner was at famed local eatery Cenaduria Tlayudas Libres, which opens at 9pm. Cars double-park out the front and locals come from far and wide for their famous Oaxacan tlayudas (a massive tortilla, folded in half and filled with cheese, beans and chargrilled meat). After snaring the last available table, we watched smoke billow from the street-side barbecue before sharing the simple, smoky specialty. It was exactly what we felt like eating, and for only about $2 Aussie each, we were laughing!

The next night we made it our mission to try some different mole sauces. Mole, which originates in Oaxaca,is a herby sauce that comes in seven different colours to match various meat dishes. I was determined to try “negro” (black) mole (which takes six days to create) and was a tad surprised when the dish was served – see the picture below. But one forkful of chicken, mole and rice had me murmering delight – it was unlike anything I’ve ever tasted. The rich, spicy sauce had chocolate undertones, making it tick the dinner and dessert box, which is ideal for a sweet tooth on a backpacker budget!

But food isn’t the city’s only drawcard. Whether you’re wandering through the historical area, admiring the colourful buildings or walking wide-eyed through the local food markets, there’s plenty to keep culture-hungry tourists entertained. The grand Iglesia de Santo Domingo Dominican cathedral (pictured above) is as remarkable as many European churches and simply listening to the indigenous people speak in their native tongues reminds you you’re in a place unlike anywhere else in the world.