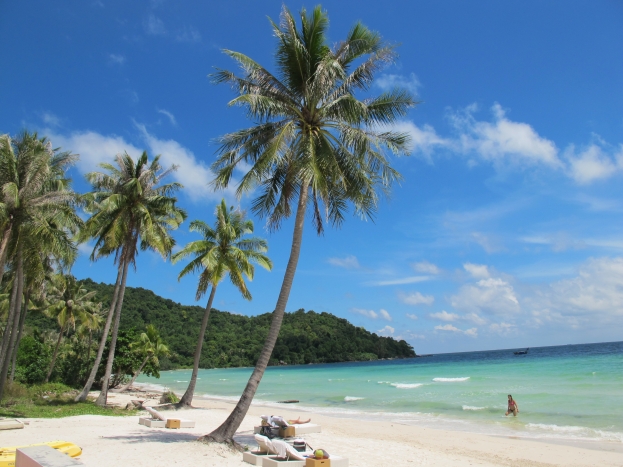 There’s little denying the negative influence globalisation has had on travelling. Coca Cola signs are splashed on buildings in the most remote pockets of developing countries, and capital cities are all awash with international brands. It makes picking up a pair of bargain-priced sneakers easier than it’s ever been before, but with every McDonald’s, Chanel or Apple logo that pops up in a city, you feel like you lose a little bit of the local experience.

And that’s why Phu Quoc is so special.

This palm-tree spangled island sits snug between Vietnam and Cambodia and in many ways feels like Asia’s last frontiere. Australians are always on the hunt for the “next” Bali or Phuket, and I reckon this might be it. But be quick – give the quaint island a decade and the untouched beaches and rustic fishing villages will probably have been shouldered out for international hotel chains. 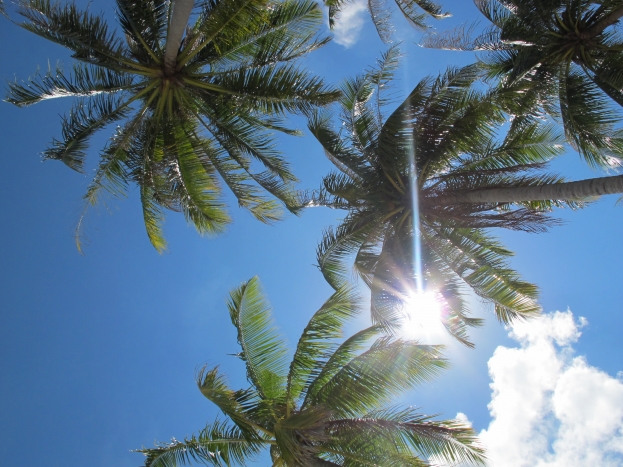 Just 35 minutes after taking off from Ho Chi Minh City, our Vietnam Airlines flight scooted down the runway surrounded by distant hills and lush greenery. We collected our bags, jumped in a taxi and headed to Cassia Cottage for a couple of days in Duong Dong town – the biggest town on the island. Cassia Cottage was simple and had everything we needed – although of course was about 10 notches below the Nam Hai, where we’d just come from. But after paying through the tooth just to breathe there, it was nice to be back amongst “our kind of people”. 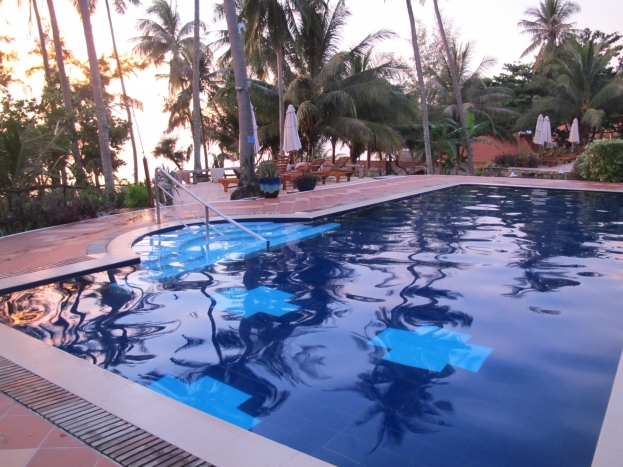 A quick wander around town saw that box ticked and we vowed to spend the rest of our trip lying horizontal on any of the incredible beaches dotted along the 50km x 20km coastline. 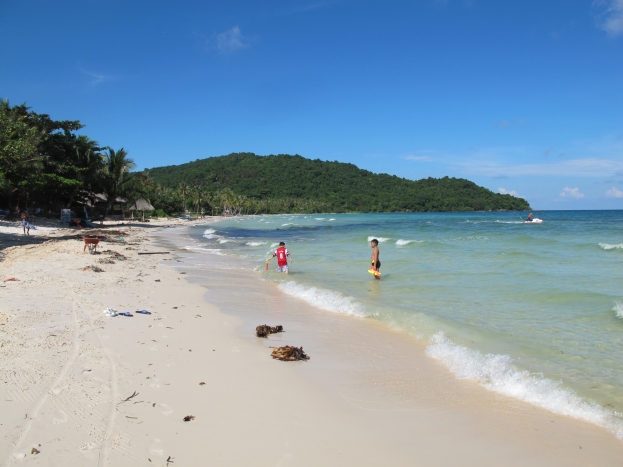 And postcard perfect beaches we saw (hello – did you see the image at the top of this blog?)

On our first full day we hired a driver and travelled about an hour along red dirt and pot-hole filled roads for a few hours at Sao Beach, widely known as the most beautiful beach on the island. With sand the colour of snow, it wasn’t hard to see why. We grabbed a fresh seafood lunch at the restaurant and a fresh coconut to drink then laid our towels down under a palm tree to ensure we were doing everything in our power to return from our honeymoon blissed out. If Joel (my travel-buddy-come-husband) didn’t have an ear infection we probably would have gone snorkelling too. 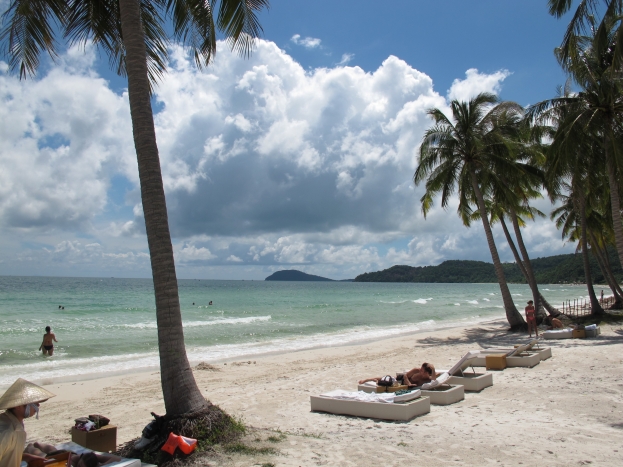 Unfortunately the beach beyond the restaurant area was filled with litter, which does make your heart sink. Vietnam just doesn’t have the infastructure for waste management we have in Australia and as a result, the rubbish just washes up onto the beach and is only cleaned by businesses on their own stretch.

Driving around the south corner of the island made it abundantly clear how soon Phu Quoc would change. Huge slabs of beachfront land had been cleared for Accor and Intercontinental developments, while a 1000-bed hotel and theme park had just opened towards the north of the island to cater to wealthy Chinese tourists. Our driver pointed out some housing estates in the centre of the lsland and explained that the government had forced fisherman to move there in order to sell the beachfront land to foreign investors. He said the fishermen are furious having to live so far from the water, especially considering many of them fish for 18 hours a day. Tourism is obviously bringing the dollars to the country, and considering we were taking advantage of Phu Quoc’s natural beauty, it’s hard to judge what’s right or wrong.

Back at Cassia Cottage, we grabbed a bevvie by the pool to watch the sunset. 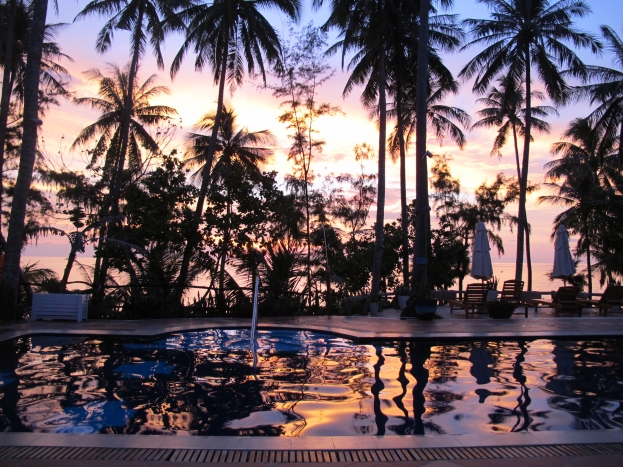 Then took a 10-minute barefoot stroll along the beach to Rory’s Beach Bar, which we enjoyed so much we went back there both nights. 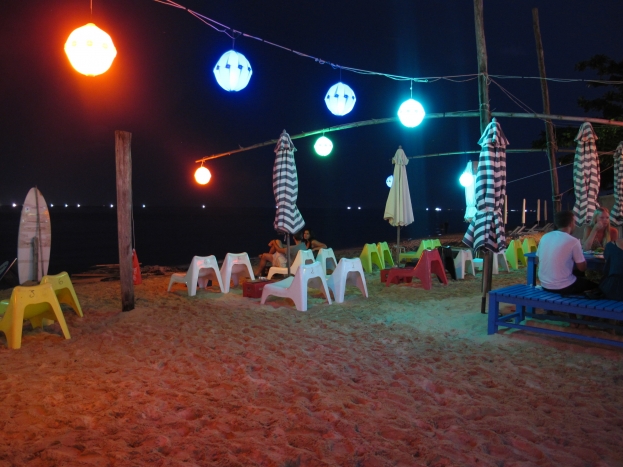 Owned by a Sydney couple, it’s got all the ingredients you need for a good night – happy hour cocktails, colourful lanterns and owners who are more than happy to have a yarn. Come sundown the horizon sparkles with the lights of squid boats, hauling in their catch to feed tourists (and the world) fresh seafood. 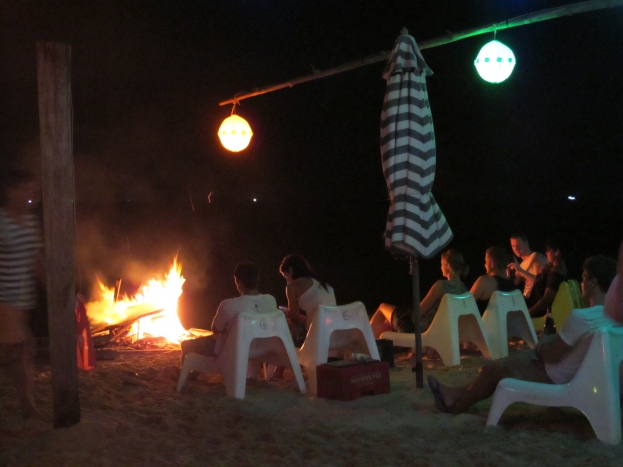 Before we knew it, there were only three days left on our trip and we’d planned for a final “zen out” hurrah. Wait for my next blog to see where we ended up – it’s the definition of bliss.