Two VCE students at Melbourne’s elite Xavier College have been caught bullying public school kids online, calling them “povo” and “retards” on the eve of their English exam. It’s left me horrified by the privileged little shits and wondering how their parents have responded.

Are they mortified that their child has no concept of the privileged hand they’ve been dealt or are they quietly supportive of their child’s sneering at the lower classes? Surely you’d march them straight down to their local Salvos to spend their summer volunteering with those less fortunate for a dose of appreciating their ovarian lottery win.

Public school shaming is hardly a new thing. Back when I was in Year 10, I went with a group of fellow Frankston High students to see the Dalai Lama speak in Melbourne. We were fresh-faced, budding adults who were amped to learn about enlightenment.

But instead of a warm welcome out the front of Rod Laver Arena, a group of private school girls taunted us for being poor.

“Look at the sluts,” they sneered in their ankle-length skirts. “They’re so poor that they couldn’t even afford enough material to cover their legs.”

We responded with dropped jaws and red faces, but no desire to be anything like them. We lived on the suburban fringes and had not been exposed to the world of exclusive private schools, let alone ever been made to feel like second-class citizen for going to the local public school.

I’ve often wondered what became of those snobs. I’m not sure what I hope for them – that they found the real world much harder than the sheltered little lives they’d lived, or that they got grounded and became decent humans. For the sake of society, I guess the latter would be better. But it’s pretty hard to forgive a bully for being a class A douchebag.

As for me and my publicly educated friends, well most of went on to get degrees and now go pretty well in our chosen fields. Sometimes we even wear short skirts even though we can afford long ones.

At any rate, the “povo” kids in the latest scandal have had the last laugh, hitting back with a hilarious grammar-check of the Xavier kids’ post. 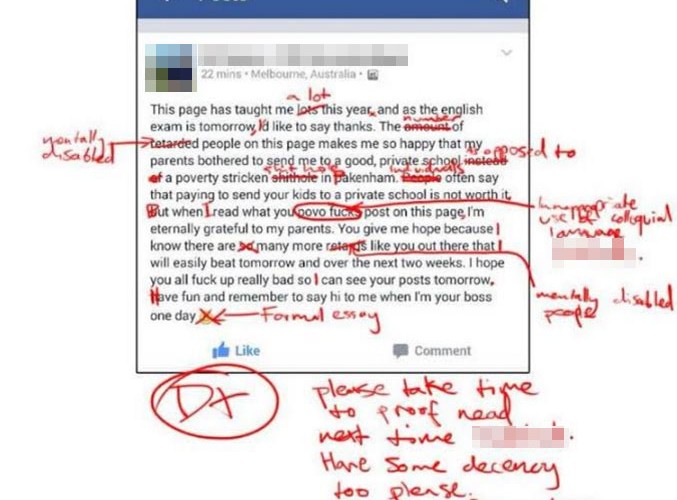 Meanwhile, my girlfriends and I are left with images like the above in our infamous Frankston High bumblebee jumpers, serving as a perpetual reminder not to take ourselves too seriously.